Here’s a brief summary of Living Between Worlds conversation #2.4

(You’ll find the recording here, and the entire series here. My extended written excursion on these themes is still in the oven, and will post here (and other places) when it’s baked. Meanwhile, you can register for the continuing conversation here).

In June we introduced the notion of “capital-ISM,” the structural defects that characterize it, and my claim that the notable reform efforts underway, while demonstrating widening reach and growing impact, rarely confront these structural defects directly.

This month we dug deeper, unpacking each of these structures, and asking: Are they accurate? Is this list complete? redundant? How do they amplify or constrain each other? It became clear, in our conversation, that these five defects are richly interconnected, supporting and exacerbating each other—but also that ascribing them to capital-ism may not get to the heart of the matter.

I proposed that the structural defects that I’m ascribing to “capital-ism” are not uniquely its own but rooted in the “economism” that has captured the world mind for centuries, and has gone to town in the last half-century.

“The takeover,” as Hazel Henderson put it, by “the philosopher kings” of economics, “of public policies, mass media, political discourse and the narratives of business, entrepreneurship, human motivation, and social organization…in both industrial and developing countries.”

So, we wondered, how do systems change? We turned to Dana Meadows’ classic Places to Intervene in a System, which pushes our habitual thinking upstream, from the metrics and mechanisms readily at hand to tweak and fiddle, to the underlying, shaping, less tangible phenomena of rules, goals, norms, and mindsets, and vision. 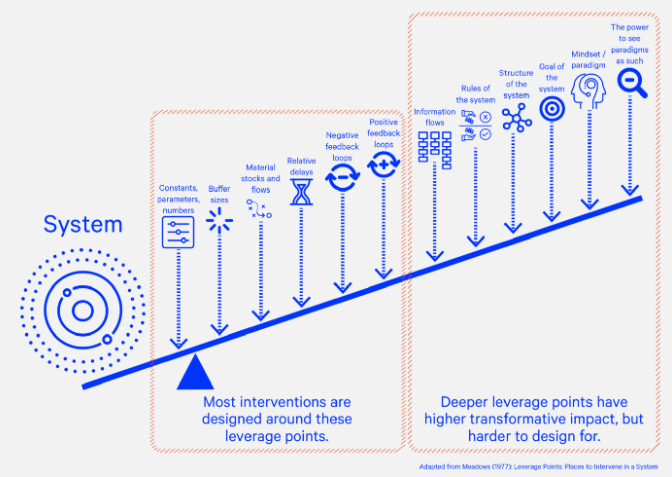 Grouping them this way highlighted the dynamic, ongoing interaction between these two realms: the upper, the domain of context, shapes what we see, seek, and even deem possible (at both conscious and subliminal levels), and conditions what moves we’ll even attempt at the lower levels. The lower, the domain of our direct interaction with the world, and our experience in those encounters, in turn, shapes and feeds what we’re are able to perceive and understand. And these realms inform and shape each other.

We concluded with Antonio Gramsci’s century-old declaration that “The old world is dying, and the new world struggles to be born: now is the time of monsters.” Monsters can represent the terrifying, or the unknown. I asked “How shall we live in the time of monsters?” and suggested that we do—and must do—three things:

And we wonder:
What do you think? What does this provoke for you?
The Living Between Worlds webinar series continues on the third Wednesday of each month. There is presently no cost, but you must register to attend.

This site uses Akismet to reduce spam. Learn how your comment data is processed.

The default page on the live site is loading an empty sidebar.